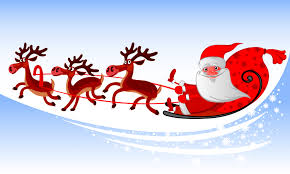 Aside from the fact that Santa usually brings good cheer and Google sometimes makes you want to throw up your hands and say “forget it,” it turns out there are a lot of parallels out there between Google and Santa Clause. The popular rhyme, “He sees you when you’re sleeping, he knows when you’re awake, he knows if you’ve been bad or good,” takes on a new meaning when you’re an SEO. And so in the spirit of the Holiday season, check out some of these similarities below!

They’re full of surprises that keep us waiting.

You never quite know what Google is up to and what Google has in store much like you don’t know what Santa will bring. Whether it’s a new algorithm update, a new feature on one of their products, or announcements about ranking factors, Google is the master and keeping things a secret. This keeps us waiting and reading Google blogs and listening to influencers to try and get any glimpse of what’s coming. Unfortunately you never can be sure until it happens.

Google knows everything about you.

Just like Santa is always watching, Google is always watching your web surfing history. They know where you live, what you’ve been searching for and what you want, where you work, what you like to do for fun, who your friends are, and more. As author Jeffrey Gitomer puts it, Google is the only other thing besides Santa that knows where everybody lives and can always make it to your home and everybody else’s home on Christmas Eve.

Google keeps a list of the good and the bad.

Just like Santa has a naughty and nice list, Google keeps tabs on whether or not you’ve been using white hat SEO tactics and publishing relevant, quality content. You’re constantly being judged, and if you don’t make the cut one-year then there is a good chance you will get penalized instead of earning those great rankings you were hoping for.

You have to follow the rules all year long.

In this scenario, the algorithm updates would be like Christmas. It’s not okay to suddenly start using white hat tactics when you think an algorithm update is about to hit. You have to follow the SEO rules all year round in order to reap the benefits of an algorithm update, and simply putting on an act at the last minute just isn’t going to cut it. As Santa would tell you, the same goes for all the children waiting for Christmas.

You can tell them what you want each year.

And you never quite know if they’re going to deliver. Just as you tell Santa what you want for Christmas, the SEO experts are tirelessly comment on blogs and sending requests and working with influencers to get their wishes heard. Although Google isn’t quite as accessible as Santa on this one, they do have forums and representatives out there for you to express your thoughts. They also have a few tool out there to help show you how to get what you want, such as the PageSpeed Insights tool or, even more significantly, the disavow links tool.

Gifts from Google are the best gifts of all.

As a child, you remember that getting gifts from Santa was the best. It was nice to get presents from your parents, but it just wasn’t the same.  When all is said and done, it’s Google you want to hear from at the end of the day. Another agency can tell you that you’re doing a great job and your SEO is improving, but if you’re not seeing it from Google (in the way of rankings), it’s just not as satisfying. The same goes for hearing announcements or hearing about new features from other tools and companies—it’s great, but a Google news story would trump that any day. Is there anything that you would add to the list? Let us know the comment section below, and Happy Holidays from the SEO Agency team!