The SEO and Social Impact of the Super Bowl

“What time is the Super Bowl?” This is the headline Huffington Post runs every year a little bit before the Super Bowl. The article consists of three sentences, telling the date and time of the game as well as the two teams playing and where you can watch it. Then it ends with “That’s all you need to know.”

It’s genius, really, and it shows the broad landscape of the Super Bowl and the kind of buzz and attention it generates. The simple Huffington Post article is essentially just for SEO—to draw in all the people who type “What time is the Super Bowl” into search engines. It’s the No. 1 search result because it’s exactly what people are looking for when it comes to the biggest sports day, and game, of the year, and The Huffington Post is just capitalizing on it in the simplest, most effective way.

Almost every person in America pays attention to the Super Bowl on some level, even if they’re not sports fans, so it should come as no surprise that the event has a gigantic impact on the worlds of SEO and social media. The question is, however, how exactly does it impact SEO and social and what can we learn from it?

Just like Huffington Post accomplished, many sites set out to piggyback the sheer popularity of the Super Bowl for their own company’s gain. From news outlets to grocery stores to personal blogs, almost everybody can gain something from the event, whether it’s Super Bowl-related promotions or articles/postings about the Super Bowl in an attempt to pick up some SEO traffic. The Monday after the Super Bowl is also one of the busiest days in online traffic with everybody looking up commercials, highlights, analysis and more. It’s almost the second coming of Cyber Monday, only people aren’t going online with the sole intention of shopping. This year, that was especially true in the Midwest with the record snowstorm that hit the area and kept scores of people trapped inside their homes without much to do other than surfing the web.

Your company can piggyback off that uptick in online traffic both before and after the Super Bowl. Have a special Super Bowl sale or utilize real-time advertising with Super Bowl-related ads. Of course, so many other companies are trying to do the same thing, so it would be beneficial to get specific with your SEO keywords and such. You can market your company/product online using social media, as well.

The social impact of the Super Bowl continues to grow each year. Of course, it helps that this year’s Super Bowl was the most watched TV show in American history. According to CNBC, users generated 265 million posts on Facebook and Twitter users more than 28 million tweets worldwide, both new records.

Social media was also vital in the commercials that aired during TV timeouts. Of the 66 commercials that aired during Super Bowl XLIX, 33 featured a hashtag (again, according to CNBC) in an effort to get fans to dial in on their phones, computers or tablets, as well. A 30-second spot during this year’s Super Bowl cost $4.5 million (another new record), so in order to make it worthwhile, it would be beneficial for each company to do everything they could to keep the conversation going about their spot even after the 30-second ad ran. Hashtags are a great way to do that, which is surprising only half the commercials had hashtags.

Here’s a great example of a simple hashtag (#BestBuds) in Budweiser’s ad that tugged on the heartstrings of animal lovers everywhere:

The great thing about that commercial, too, is Budweiser released the one-minute-long spot online before the game even aired.  Yes, it cost upwards of $9 million for Budweiser to air that commercial during a TV timeout, but with the buzz created from releasing the commercial ahead of time mixed with the hashtag and the YouTube release, it can be seen as an overwhelming win for Budweiser. Through Sunday, Feb. 8, (one week after the Super Bowl), more than 26 million people viewed the spot on YouTube. Budweiser also benefitted from the early release when popular sports and social sites like USAToday’s For The Win had write-ups on the commercial days before it even aired.

Not surprisingly, the “Lost Dog” commercial came in with the most positive social media comments, according to VentureBeat.com. On the other hand, however, the Nationwide commercial is an example of a commercial including a hashtag and creating a buzz, but for some of the wrong reasons:

After watching the horrifyingly shocking commercial, social media users weren’t motivated to use the #MakeSafeHappen hashtag and instead discussed the jarring ending of a commercial featuring a cute little kid admitting he died in a home accident and will never grow up to get married or learn to fly. No publicity/attention is bad publicity/attention, I guess. It certainly got people talking and left a lasting impact that may never be lost or forgotten.

Then there was the Carl’s Jr. commercial that had sex appeal and flashed a link to their Facebook page, but didn’t bother to include a hashtag: 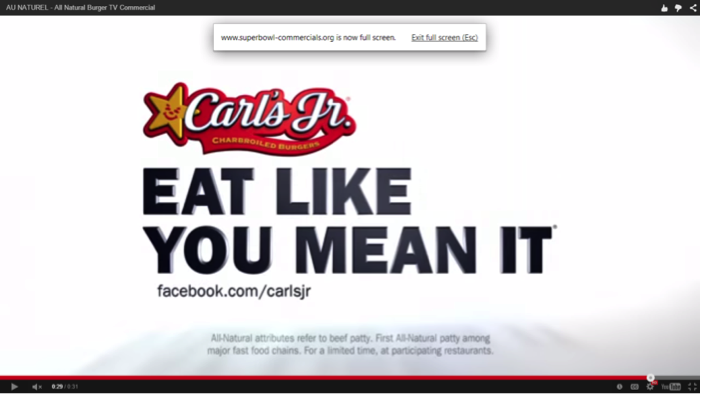 The Facebook link is all well and good, but why not include a hashtag, too? Missed opportunity for Carl’s Jr.

Really, we can just call this subhead “The Left Shark,” since it stole the show from Katy Perry’s routine. Sure, her show included former rap icon Missy Elliott and the classic Lenny Kravitz – both household names – and there was still some question about whether Katy Perry would follow in Janet Jackson’s footsteps with any sort of “wardrobe malfunction,” it was the Left Shark that had everybody talking after the performance. 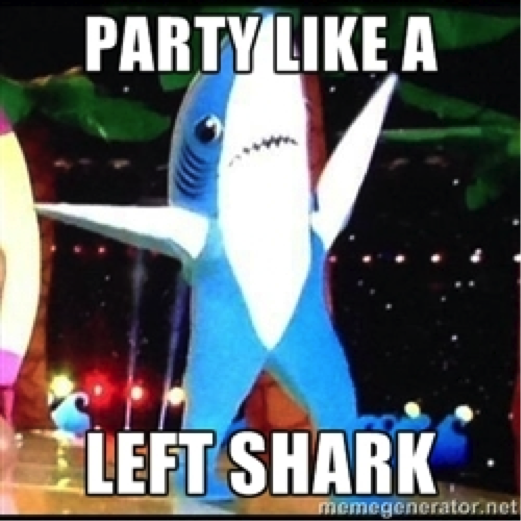 Statistics show the use of a simple #LeftShark hashtag generated 26,606 mentions on Twitter, more than the #Patriots (25,203) and #KatyPerry (19,247) hashtag. The Left Shark was just the wacky, outside-the-box and funny occurrence that generates a lot of popularity on social media. The ridiculousness of the Left Shark seemingly forgetting his dance routine extended to every corner of the Twittersphere, from Snoop Dogg Lion joking he was behind the Left Shark, to scores upon scores of memes created, like the one above. Online, nearly every outlet addressed the meteoric rise of the Left Shark as well as the aftermath, from Today.com to BusinessInsider.com to BBC.com and, of course, Buzzfeed.com.

The impact of the Super Bowl on social media and SEO can be felt far and wide. And this isn’t even focusing on the game itself or the players on the field and the crazy ending to this year’s game that incited a wide range of emotions from each team’s fanbase as well as general football/sports fans.

With the rise of social media and the importance of SEO, it makes sense that such a popular event as the Super Bowl would carry over into every aspect of both online worlds. But each year, the popularity on social media continues to rise and more and more companies learn ways to take advantage of the enormity of the event. Get a head start and begin thinking about how your company can piggyback off the Super Bowl’s wild popularity.